Cats are loved by most of the people as a pet. They are cute and adorable with their normal apperance. However – Nature sometimes emphasise their beauty with rare combination of outer look like: White Cats With Blue Eyes. This article will focus on these unique cats. But, First – Let’s learn some information about cats. 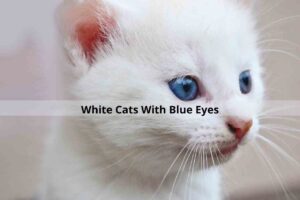 Cat is only a domesticated mammal of the Felidae family. So, to distinguish it from the wild species of the felidae family, they are also called domestic cats. These domestic cats are basically valued for their companionship and their ability to kill rodents.

The cat has got a strong flexible body, sharp teeth, curved pointed claws which are adapted for catching the prey. Average weight varies from 2.7 to 4.5 kg with average length of 71.1 cm for males and 50.8 cm for females.

They are nocturnal in habit. A layer of guanine present in the retina had made it extra sensitive for light. Due to the presence of guanine, the eye shines at night in extra light. They also have a well developed sense of smell and hearing. Now – Let’s move forward to our main topic, white Cats with blue eyes.

Yes – This combination of white fur and blue eyes in cats is rare. Out of the total cat population, only 5% are white Cats. Inside those 5%, only few have blue eyes.

They are considered as the sign of good luck around the world.

A white cat with blue eyes has a number of positive signs. Unlike black cats they symbolise good fortune and good luck in different cultures across the globe.

In many parts of the world, people believe that buying white cat brings prosperity and joy to the home. It is also an indication of good health as white colour stands for cleanliness and purity. White cats are supposed to be much friendlier than other cats.

The crossing of the path by white cat is considered as the sign of good luck. However, this varies according to the culture as that of black cats. It is also believed that seeing a white cat on the way to work is supposed to be a positive signal for promotion, increase in sales etc.

In Japan they are often called the lucky cats and are placed at the entrance with one paw raised to attract abundant customers in business.

Generally, Almost all cats have blue eyes during the birth irrespective of their coat colour. This is because, there is no melanin pigment in cats eyes at young age. During birth, there are no melanocytes in the iris. The eyes are actually transparent. The blue colour in cat eyes during this age is due to the refraction of light. With time the blue colour changes to the normal cats eyes colour like Green. But, In true blue eyes white cats, the melanin production doesn’t increase or change with age. So, Eyes remain blue. This melanin production in this cat is controlled by W gene which is also responsible for white fur and deafness.

Therefore – You shouldn’t buy a white cat with blue eyes during their young age. The eyes colour may change later. So – It is advisable to buy this rare cats when they are young. That’s how you can ensure the blue eyes remain with cat for lifetime.

The blue eyes and white fur colour combination is rare to found in cats. Therefore, there are few breeds which possess this combination in real. All other are so called. Below we have listed for true white cats with blue eyes breeds:- 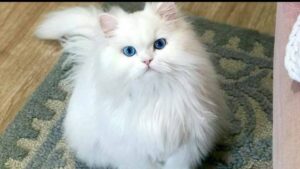 Persian cats are the most popular breeds of white cats with blue eyes in the world. They possess soft and silky coats with attractive faces. These cats are friendly, intelligent, playful and attractive which makes them suitable as pets. 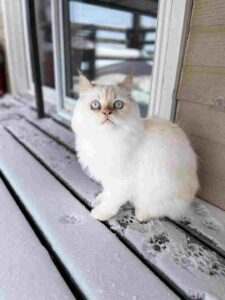 These breeds are intelligent and most social. They are playful and used to play with paper or kitty toys. They have round eyes with bluish appearance. The fur are medium long with silky texture. 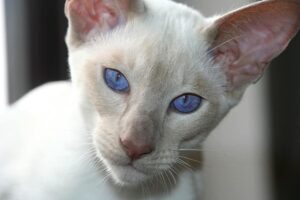 They have a slender body, thin legs and long tails. This is one of the most recognizable breeds of felines. It has amazing white coat with deep blue eyes. They usually contains some brown markings on face or other body parts. 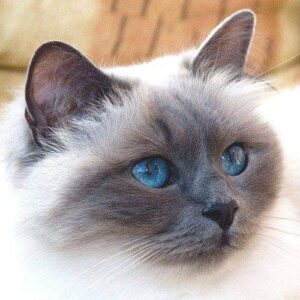 They are characterised by a medium sized body, broad face and roman nose. They are friendly and playful which makes them more preferable as a family pet. They are also known as Sacred Cat Of Burma. 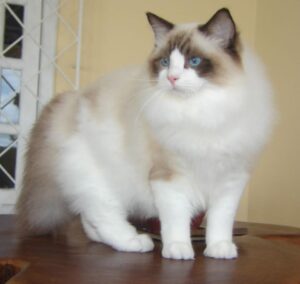 They are really attractive with long hair. They have got a silky coat with oval blue eyes. They are friendly as well as loyal to the owner. They have friendly nature.

It is another cat that can’t be said a true white cat with blue eyes. However, It do posses some character. The fur is long and creamy white mixed with brown colour on face and ear. The eyes are blue in colour. It is long hair siamese. 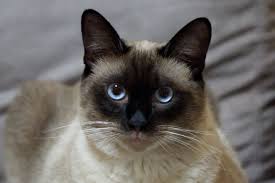 This breed is the result of cross between Siamese and Burmese. The cat also posses white colour mixed with brown. The eyes are blue colour. It has both short hair and medium length hair breeds. This cat is playful in nature. 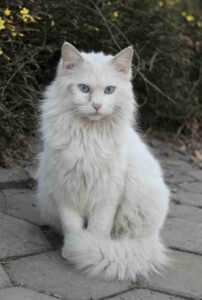 Prices vary according to breed type. Below are the price of different White Cats With Blue Eyes Breeds in USA:-

White Cats With Blue Eyes are truly the gift of nature. They look so elegant that you can’t take your eyes off. If you are one who wants cat as a pet and looking for some unique features then, White Cats having blue eyes can be a great choice. They are loyal and friendly. You can adopt them or bought them from authorised pet shop.