String of turtles is a very popular attractive trailing semi succulent. It is called so because of the pattern on its foliage. It is native to tropical rainforests of South America. It can be especially found in rainforests of Ecuador and Brazil. It has tiny round waxy, leathery textured green leaves with white veins on purple patterns. The patterns on their leaves  resemble little turtle shells. The leaves are clustered in the thin delicate vining strands. On maturation, it produces about 2 to 3 inches long spikes like flowers. 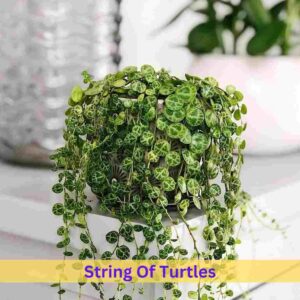 It is an evergreen and perennial plant which grows natively on the floor of tropical rainforests. It prefers a cool climate but is not frost tolerant. Due to its succulent-like leaves, it can be somewhat drought tolerant as it can store water inside the leaves. It is a slow grower and the growth rate decreases significantly with maturity. The plant dies eventually after the maturation which may take around 3 to 5 years.

It is preferred for its foliage beauty and is used popularly for hanging baskets, terrariums or indoors. It is used as a decor in a small indoor space. It is mostly pot bound and sprawls out slowly without covering a large area. It can grow about 4 inches tall with 1 to 2 feet long trailing stems. So, it is also called mat-forming plant though it takes too long to form a large ground cover. It’s relatively easy to find plants these days. It’s not rare or uncommon to find by any means as it used to be because of its popularity. It doesn’t invade or shade out other plants around. It can be known by other names like Jade necklace. It grows best in USDA hardiness zones 10 to 12.

It is capable of adapting to a range of growing conditions and has a relatively slow growth rate, making it the perfect plant not only for the beginners but also for someone who doesn’t have much space at home. Also it contributes to your well-being by filtering contaminants like formaldehyde from the indoor environment.

The general information of this beautiful plant is tabulated below:- 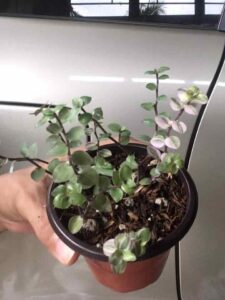 The String of Turtles are variegated to make their appearance even more attractive. The variegated ones have white or pinkish spotty bits on their leaves.

String of Turtles Vs String of Frogs 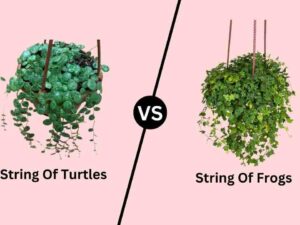 String of Frogs also called Creeping fig belongs to Ficus species whereas String of Turtles are Peperomia species. They can be compared in terms of their growth rate. The String of Turtles won’t form mat or outcompete other neighbouring plants and doesn’t need frequent trimming because of their slow growth rate. They are nowhere near as vigorous as Creeping figs. The string of Turtles never grips the background hard enough that you may damage it trying to remove the plant nor does it fill the substrate with a dense network of strong roots that pull up everything else as you try to uproot it. String of Frogs grows to an invasive level if left unchecked for some period whereas String of Turtles doesn’t need much attention and grows consistently at their own speed.

String of turtles is a perfect non-demanding houseplant in homes with pets and childrens. It is non-toxic in nature. However, it is better to keep it out of their reach to protect the leaf from damage and ingestion of insecticidal sprays if used.

Since this succulent is also considered a tropical plant, its care needs are quite different from what most succulents require. So, if you want your string of turtles to stay happy and healthy for years to come, make sure to follow the following care guide.

The string of turtles is quite adaptable when it comes to light exposure. It prefers medium to bright indirect light exposure. Placing it in a spot where it can get bright, indirect sunlight, like near a south-facing or west-facing windowsill would be really beneficial to the plant in terms of light condition. Make sure to never expose your plant to full direct sunlight for more than an hour, as this will cause sunburn damage to their leaves.

Since the String of Turtles is a mix of succulent and tropical plant, its soil must be relatively acidic and quick draining. It prefers loamy and moist but not too wet soil. The best way to achieve this is by creating a mixture on your own using succulent soil, then mixing it with organic matter like peat, coir, or compost and about half as much inorganic matter like small bits of pumice, gravel, or crushed granite. Using a premade cactus and succulent potting mix is recommended as well. Make sure not to get it compacted over time.

You need to make sure your String of Turtles is getting enough water to stay healthy. It is recommended to water it once every 2 to 3 weeks or whenever the top 2 inches of soil becomes dry. Keep in mind that over and underwatering will both lead to problems like root rot, discolouration, losing leaf patterns or even pest infestations.

Since this plant is native to the moist of the rainforest floor, it is best to keep the humidity level at a minimum of 40%. It grows ideally in the 50 to 60 % range. Avoid any water residue on the leaves. Consider running a humidifier nearby on a low setting to keep a constant and stable humidity, especially during winter months, dry seasons or when the heater is on.

String of turtles doesn’t really need fertilisers for its growth. However, feeding them with a traditional houseplant fertiliser diluted in a 50/50 mixture or something higher in nitrogen at least once every 2 or 3 weeks from summer to spring would probably be better and help maintain bright shiny vigour leaves and patterns. It is stopped during off-seasons, which is from fall through winter.

Potting is done by preparing an organic soil mix according to plant requirements as we discussed above. It is then poured in a pot with some drainage holes to maintain proper drainage and air circulation. The soil should be moist but not too wet.

String of turtles doesn’t need repotting very often as it would take years before it reaches its full maturity and outgrows its pot. It is recommended to repot it at the beginning of its growing season to give it fresh soil and fertiliser and check their roots as well. You can also decide whether your plants need to be transplanted to a bigger pot. The pot should be 10 percent larger in volume than String of turtles.

It is a slow growing plant which needs years to mature. So, training and pruning activities are rare. You can trim down the damaged leaves, unruly, leggy, stunted and dying strands if observed using any pruning tools. 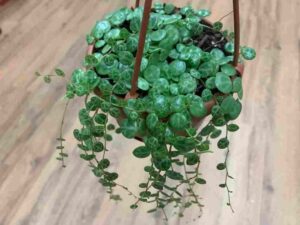 String of turtles can be easily propagated through cuttings directly in soil or through water medium.

1. Directly on the soil

Firstly, Start by snipping off a healthy section from the mother plant using a sharp, clean blade.

Secondly, Remove some of the leaves towards the bottom of where you are propagating.

Then, lay the entire cuttings on the top of your potting mix and make sure the nodes are somewhat nestled into it.

Once done, place your cuttings in a bright, indirect light and remember to keep the top of the soil lightly moist for the first several weeks by misting it until the roots get established and start to push out.

You can then pull back on watering and treat it like a normal growing plant.

You can also propagate the cutting in water medium and watch the roots grow. Make sure you’re changing that water a few times a week. Then, the rooted plant should be transplanted in a well draining potting mix rich in organic matter.

Their presence can be identified by the little yellow bumps and in prolonged periods webs are observed. Showering or sinking and washing down all the leaves can deal with this pest.

They are cotton balls like structures under the leaves. They can be removed by wiping off using a cotton dipped in rubbing alcohol.

They are tiny flying insects found underneath the leaves. They can be easily killed by insecticidal soap.

There are not a lot of diseases seen in String of turtles. It can be prone to fungal and bacterial diseases in case of overwatering. Other problems like root rot, yellowing and falling off leaves, soft stems may arise when the soil stays too wet or roots get infected. Follow your proper watering schedule and let the soil dry in between waterings to protect these problems.

The price of String of turtles ranges between $22 to $39 and can be found on many online purchasing websites.

String of turtles is one of the delightful tiny trailing plants which can fit easily on any part of your house. Its thick leathery textured leaves resemble little turtle shells and are very unique and eye-appealing. Its non-toxic nature adds beauty to this plant. It is capable of adapting to a range of growing conditions and has a non-demanding care guide. It’s like a blessing for first time plant owners or the ones without ample space to decorate. So, just grab your String of Turtles and start your beautiful journey with this amazing creation. I doubt you’ll ever regret purchasing this gem.