Masdevallia Schmidt-Mummii is an orchid plant in the genus Masdevallia which falls under the family Orchidaceae. The genus Masdevallia consists of 500-600 species. This species has been first described in 1978 by two botanists viz., Carlyle August Luer and Rodrigo Escobar. It was first of all reported from the forest of Colombia at an elevation of 1800-2600m. This is the miniature sized cold loving epiphytic species with slender, erect stem (ramacauls). 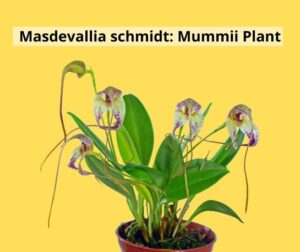 They are distributed from Southern Mexico to Southern Brazil. Colombia, Venezuela, Ecuador, Peru and Bolivia are considered as the main centres of distribution. This plant is epiphytic in nature and found commonly in tropical rainforest. It is commonly found in high altitude especially in the environment where mist, rain, fog and relative humidity of 80-90% prevails.

The morphology of Mummii plant is described below: 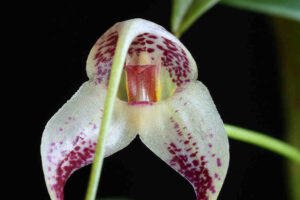 This plant usually flowers in the fall. Flowers are long cylinders and zygomorphic. The inflorescence arising from low in the ramacaul that measures 8-11cm usually bears a single flower. Flowers are solitary that are nestled amongst leaves. Its flowers are meretricious measuring 4-6 cm in length. Petals are pinkish-purple in colour.

Multilayer Farming: Is It The Future Of Sustainable Farming?

Growing Mummii Plant – Masdevallia Schmidt is too easy. However, you should take care of following factors:

Bright but indirect light is preferred by this plant. About 25% shading in winter and 70-90% shading is required in winter. For better flowering, plentiful light is essential. In inadequate light conditions yellowing of leaves may occur that hinders the growth and development of plants. Also, too bright light conditions are also dreadful.

Mummii is a cool loving epiphytic species. The favourable range of temperature for this species ranges between 10-20 degree celsius. Leaves may drop if the temperature above 30 oc prevails for a longer duration of time.

Yellowing of leaves may be observed at temperatures above 25 oc.

The soil mixture containing perlite, vermiculite and other chunky material is considered best for this plant. Generally light and loose soil is preferred.

This is the moist loving plant and could not withstand dry conditions. However, too much wet conditions must be avoided. During summer daily watering is required whereas in spring and winter watering at weekly intervals is sufficient.

Plentiful availability of water should be ensured otherwise the plant will wilt or die.

Since Orchid requires high humidity. So, humidity should be maintained around 70-80% for optimum growth and development.

Orchids are not heavy feeders. So, fertilising them once every two week is sufficient. This is susceptible to salt. So avoid excess fertiliser. Always use balanced fertiliser to ensure proper growth and development.

Potting is an important cultural practice for growing this plant. A pot of appropriate size should be selected. Potting mixture can be prepared by using one part of Sphagnum peat moss, One part of perlite and two parts of pine bark. Sphagnum Peat moss plays an important role in moisture retention and aeration. Perlite increases the air circulation around the root and also facilitates drainage. Pine bark also provides aeration, nutrients and also facilitates drainage.

Repotting should be done every two years. However, you can repot your Mummii plant when it starts to grow outside the containers and its roots emerge from the drainage hole. Generally, spring is considered the best season for repotting.

For repotting at first the plant is gently removed from the initial pot with a root ball and dead roots are trimmed off. A new pot of required size is selected and a potting mixture is placed in it and then the plant is transplanted in it.

Orchid including mummii can be propagated easily by any of the following means:

After flowering, stems measuring about 1 foot length are snipped from the mother plant. There must be three to four nodes in each cutting. Then the cuttings are kept in a rooting tray containing a layer of pebbles, Sphagnum moss or bark. The tray is covered with plastic to maintain the humidity and temperature is maintained at around 75 -85 degree fahrenheit.

By division genetically similar plants are produced. In this method, the growing plant is simply divided into two or more parts each containing at least one new shoot. Splitting also encourages the plant to produce new shoots of better quality.

It is the method of producing new plants from matured flowered or unflowered back pseudobulbs. Plants propagated from this means usually require 2 to 3 or even more to reach flowering size.

The genus Masdevallia consists of more than 300 species. The plant Masdevallia schmidt commonly occurs in high humid areas of the mountainous region.

Where to get this Plant?

Since Masdevallia is a cool loving plant and so this plant is usually found at higher elevations at an elevation of 1800-2600m. They are mostly found in high humid areas.

Mummii is an exotic plant that usually thrives in cool climates. This plant prefers bright but indirect sunlight and requires high humidity. Daily watering is required but too much wet condition is not suitable for this plant. This plant can be easily propagated by seed, bulb or stem cutting.

Parijat Plant Parijat Plant also known as Night Blooming Jasmine or Coral Jasmine in english is an ornamental tree having  immense medicinal potential and is commonly used in Ayurveda and Homeopathy. It is also grown for both floral and foliage beauty.   Parijat is  native to southern Asia and is also found in Nepal, Pakistan, India…

Butterfly Flower Butterfly Flower, also called Butterfly Weed or Butterfly Milkweed, is a beautiful ornamental flowering plant that is grown to beautify the garden and attract butterflies, bees, and hummingbirds. There is nothing more beautiful than this flower, and as soon as you see it, it won’t let you stop praising all the best features…

Kalyos Fruit Kalyos fruit commonly known as streblus asper in English is a tropical, evergreen tree that is especially found in the wild though some people are starting to grow it at commercial level. Kalyos is a monoecious plant meaning the male and female flowers are in same plant though some dioecious varieties are also…