Mushroom is one of most popular fungus with great commercial value. They have umbrella shaped fruiting bodies, typically producing basidiospore of the division Basidiomycota and some Ascomycota. They are eukaryotic, saprophytic, achlorophyllous and heterotrophic thalloid bodies having an absorptive type of nutrition. They grow in warm and humid climates at about 20 to 30 degree celsius both under and above the ground surface.

Being non green plants, they derive their nutrition from dead and decaying organic matter. They consume dead or decomposing organic debris as their primary source of nourishment. There are many edible varieties of mushroom like button mushroom, Oyster mushroom, Milky mushroom, Cremini mushroom. The edible mushrooms are a great source of selenium, nutritious and mitigate the risk of severe health conditions like cancer, diabetes, Alzheimer’s and heart disease. The commercial mushroom farming of these edible form is also growing rapidly.

Based on their nature they are classified as edible and non-edible (poisonous) mushrooms. The poisonous mushrooms are commonly called toadstool.

Mostly the mushrooms we consume are edible and non-poisonous but there may be the varieties bearing different toxins causing symptoms like skin inflammation, allergy, restlessness, nausea, vomiting and some may even lead to death if not medicated on time. So, choosing whether the mushroom is edible or not is a sensitive topic.

There is no rule of thumb for you to just recognize them in a snap. You have to first identify them to decide whether it is poisonous or not. Mostly, Mushrooms with white gills or with a volvo or with a ring around the stem are poisonous. The red colour on the cap or stem may also indicate poisonous or hallucinogenic nature. The gills are attached to stems in most of the poisonous mushrooms. Also, be particularly alert to those with natural colours like white, beige, light yellow, brown or colourless. The toxins cannot penetrate your skin but washing hands after touching it is a safe option. You should immediately seek emergency medical treatment in case of appearance of symptoms after ingestion.

Here, we’ll be learning about a few non-edible or poisonous mushroom varieties we should avoid. It is a highly toxic mushroom. It is said that even touching it could cause skin inflammation but this is highly controversial. It bears fruiting bodies red in colour with finger-like projections in appearance. It produces several toxins called trichothecene mycotoxins. It can cause organ failures and brain damage. On poisoning, it develops symptoms like peeling skin, stomach pain, low blood pressure, liver necrosis, acute kidney failure, hair loss which ultimately causes organ failures and may lead to death. It is one of the most commonly mis consumed poisonous mushrooms because it is white in colour and almost like an albino version of the portobello mushroom or a gigantic butter mushroom. In addition, these summer mushrooms grow on lawns instead of woods and are readily accessible. It is also called vomitter. Consuming it will cause vomiting, bad diarrhoea and gut cramps on the stomach within a couple of hours of consumption. It has greenish grey gills because of olive green spores. It is one of the deadliest mushrooms which resembles edible straw mushrooms and caesar’s mushrooms causing major fatal cases of mushroom poisoning worldwide. It produces a major toxin called Amanitin. It bears white gills and spores and has a ring of tissue called annulus near the top of the stalk with volva at the base. It mainly affects the liver and produces symptoms like gastrointestinal disorder, seizures, coma ultimately leading to death. It is a gorgeous orange but poisonous mushrooms which grows near tree roots or on stumps in mid fall and clusters like a giant bouquet in full bloom. It produces a toxin called illudin. Consuming this mushroom can cause nausea, throwing up, abdominal cramping,etc. It is pumpkin orange overall including its cap, gills stem and flesh. It is distinguished by its bioluminescent properties. 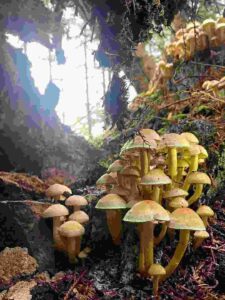 It is a less common autumn woodland mushroom and is easy to identify. It is also called clustered woodlover. Flip the cap and you’ll see light yellow with olive green hues and grow in clusters in stumps, dead roots or rotting trunks of broadleaved trees. It mainly causes gastrointestinal irritation. It is a ball shaped mushroom also called pigskin poison puffball, without a regular cap and stamp with its spores stored inside of the ball. It is pretty hard when young with inner mass initially white which turns black as it grows. It is often confused with edible puffballs which have white flesh inside. It causes gastrointestinal distress. It occurs widely in woods, heartland and in short grass from autumn to winter. 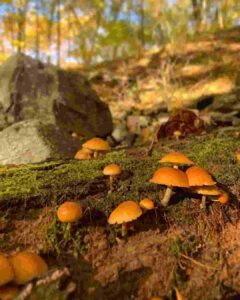 It has orange or brown large umbrella shaped flesh with gills found in woods. It is also called wood-rotting mushroom. It produces toxin called amatoxins similar to death cap. It’s actually not that similar to edible varieties but is mistaken for a hallucinogenic Psilocybe mushrooms. It can cause severe liver dysfunction and kidney failure within seven days of consumption. Ingesting these mushrooms leads to development of symptoms like Vomiting, diarrhoea, hypothermia, liver damage and other severe effects which may even lead to death if left untreated. It is a white toxic mushroom similar in appearance to edible button mushrooms and meadow mushrooms. It is collected mistakenly due to its resemblance. It causes symptoms like delirium, convulsions, diarrhoea, vomiting, kidney and liver failure leading to death. 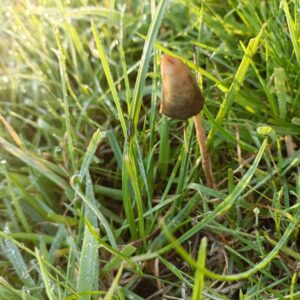 Also called magic mushroom in the USA, it is a smooth head hallucinogenic grassland mushroom. It has a conical to bell-shaped cap which contains psychoactive alkaloid content called psilocybin, psilocin and baeocystin. It may lead to symptoms like stomach pain, vomiting and anxiety attacks. It is distributed majorly in temperate areas of the northern hemisphere. The sale of this mushroom is illegal in many countries. This Amanita species bears two spores on the basidia with gills free from attachment with stalks. It also has toxin as that of death cap i.e. amatoxins which interferes in various cellular functions. The symptoms of poisoning can be observerve within 6 to 24 hours of consumption followed by kidney and liver failure, and death after four days or more. 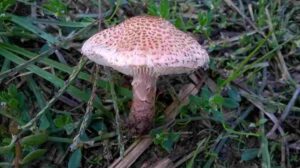 It is a gilled white non-edible mushroom with a toxin similar to death cap called amatoxin. It is seen mostly in Europe and some parts of Asia. It is commonly mistaken for edible varieties but the number of poisoning cases are not that high. It may develop symptoms like liver toxicity and different lethal effects  if not medicated in proper time. It is one of the lawn mushrooms fatal if eaten. It is innocent looking orange in colour and has a ring in the middle of the stalk. It bears similar mycotoxins as death caps. It shows the symptoms of food poisoning or stomach flu in the beginning within 6 to 24 hours of consumption followed by gastrointestinal distress, coupled with liver and kidney failure. It is common in Pacific Northwest. 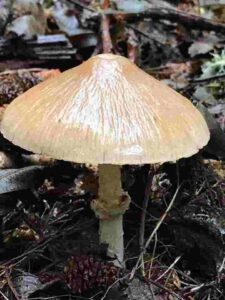 They resemble several edible varieties producing a toxin called orellanin. It takes about 2 days to 3 weeks for the appearance of symptoms after ingestion often leading to misdiagnosis. It develops symptoms like the common flu at the beginning. It ultimately causes kidney failure and even death if left untreated. It has hallucinogenic properties bearing psychoactive constituents like neurotoxins, ibotenic and muscimol. It is a highly poisonous Amanita species. The primary effect of fly agaric involves central nervous system followed by come in severe cases and in rare cases lead to death. 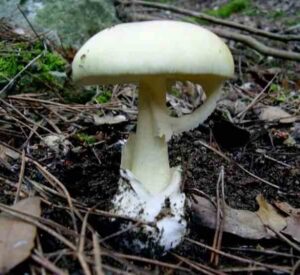 It is also called spring destroying angel amanita which is a deadly poisonous Amanita species especially in China. It is poisoned every year and the mortality rate is as high as 50%. Its caps, stipes and gills are all white in colour and have bag-lige large volvo.  It contains a fatal dose of alpha-amanitin and phallotoxins. It causes symptoms like violent cramps, diarrhoea and may even lead to kidney and liver failure. It is deadly poisonous Amanita occuring in Europe. What makes it more problematic is the appearance of symptoms several hours afterwards. It has alpha-amanitin as its principal toxic constituent which can damage the liver and kidneys, usually fatally. 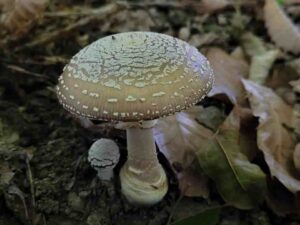 It is also called false blusher or panther amanita. It is inedible and causes severe illness if eaten fresh. It contains the psychoactive compounds ibotenic acid and muscimol which can lead to effects like hallucinations, euphoria, dysphoria, synanthesia and retrograde amnesia. 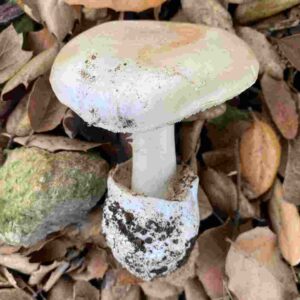 It is a western North American destroying angel. It generally appears in spring. It has stipe, ring, gill and volvo all whiteand the cap may be white or ochre with brownish centre. It resembles many edible varieties. It contains alpha amanitin as principal toxic constituent which leads to liver and kidney failure. Symptoms like jaundice, diarrhoea, delirium, seizures and coma may follow the death. It is one of the toxic hallucinogenic mushrooms containing ibotenic acid and muscimol. It is characterised by white warts which are easily detached. It contains a toxin called muscarine. It resembles a false death cap, panther cap and tawny grisette. It causes initial symptoms like visual hallucinations, vomiting, diarrhoea, stomach pain, nausea, irregular heartbeat and agitation. When not treated on time, it may even cause coma, convulsions or death in rare cases. It is a gill-bearing fungus with depressed cap and bare stipe. It is mistaken for the edible mushroom variety Paralepistopsis amoenolens. It contains acromelic acids  including acromelic acid A which is a potent neurotoxin and can cause paralysis and seizures. 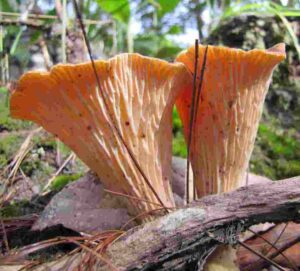 In this article, we discussed 21 major poisonous mushrooms we should be aware of. Most of the cases of mushroom poisoning can be saved by providing proper medical treatment on time. Majority of the poisoning symptoms include gastrointestinal distress like vomiting, nausea, stomach pain, diarrhoea, etc. The case becomes problematic when the symptoms appear late after the ingestion and there’s a high chance of misdiagnosis. So, we must be careful of what we eat. Edible mushrooms are rich in nutrients but bear in mind, not all mushrooms are edible. One must learn about major characteristics to distinguish edible and non-edible mushrooms in order to identify and be safe from the non-edible varieties.

Horizontal And Vertical Resistance In Plants