Khaira disease Of Rice is micro-nutritional(Zn) deficiency disease characterised by the presence of dusty brown patches on leaves which ultimately undergo necrosis. 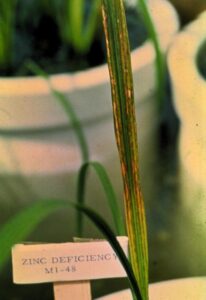 This is one of the most common diseases in rice. As it affects the leaf of the plants, the rate of photosynthesis decreases which causes (25-30)% yield loss. The disease is called so because, during the discovery of disease, the farmers find resemblance in the colour of affected rice and catechu. As catechu is called Khair in India. The disease was named as khaira disease. Besides leaves, it also affects other parts of rice plant like roots.

History Of Khaira Disease Of Rice

Dr.Y.L. Nene first discovered the Khaira disease of Rice in Tarai of UP of India in the year 1966. Initially, Dr.Nene studied the symptoms of rice plants in relation to microbes or any other pathogen but couldn’t find any relation between them.

Later, He found that the pH of soil was high in areas where symptoms were visible and pH of soil was less in areas where there were no symptoms in rice plants. He knew that the availability of some the soil nutrients is dependent on the pH. So, he started to analyse soil in the laboratory. From the laboratory analysis, he found that the pH dependent nutrient was Zinc and the conclusion was made that the cause of khaira in rice is Zinc deficiency.

There is a misconception that the Khaira disease is caused by some Pathogen or Micro-organisms. However, It is not factually correct.

The cause of Khaira disease of rice is Zinc(Zn) deficiency. Zinc is an essential micronutrient required to plants. This concludes, Khaira disease is more a physiological disorder rather than a disease.

This disease is seen mainly on calcareous soil. In calcareous soil, there is a high presence of Calcium which gets absorbed in soil colloids and prevents the uptake of Zn. Both Ca and Zn are absorbed from the same side of soil.

Sometimes, the flooded condition of the field for a long time increases the pH of soil and causes Zinc deficiency. Furthermore, There is leaching of this nutrient in the form of Zn(OH)2 in such conditions.

Some other indirect causes of this disease includes:- 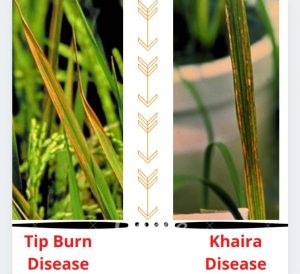 Note:- Many people often confuse it with Tip Burn disease. They are different.

Tip Burn disease in rice is caused different factors mainly by water lodging in field causing the lack of oxygen in root zone whereas khaira disease of rice is caused the deficiency of zinc.

In Tip Burn Disease, Only tips of the rice plant leaves undergo necrosis while it doesn’t affect the other part of the plant but In Khaira disease, whole leaf lamina turns brown and undergoes necrosis.

•The symptoms of khaira disease of rice appear (2-3) weeks after the transplantation when it starts tillering.

•The peculiar symptom is, Yellowing of leaves followed by dusty brown patches at an early stage. Later, These dusty patches cover the whole leaf lamina and necrosis occurs.

•Chlorosis(Lack Of Chlorophyll) is seen in affected leaves especially on lower leaves. Chlorosis occurs from the basal part of the leaf. This is because Zinc is responsible for the formation of chlorophyll.

•There is no proper development of roots. Sometimes, the roots of rice plants also turn brown and fibrous roots are totally destroyed.

•The disease symptoms appear in patches in rice fields.

•The formation of the ear(Grain Bearing Tip) is greatly reduced.

The disease should be controlled as soon as the symptoms are seen to minimise our production loss. The control and treatment methods of Khaira disease of rice are listed below:-

•Seed priming i.e Dipping of seed on ZnO solution before sowing in the field helps to reduce Zn deficiency.

•Khaira disease of rice can be controlled by spraying ZnSo4 in the nursery bed of rice before transplanting to the main field.

•During land Preparation, ZnSO4 should be applied at the rate of (25-30)kg per hectare of land.

•Mix the ZnSO4 and Slaked lime in the ratio of 1:2 and make a solution in 100 litre of water. Spray this solution 15 days after rice transplantation. Second spray should be given 15 days after the first spray.

•As high pH reduces the availability of Zinc. We should give priority to using fertilisers which reduce pH of soil like:- We can use ammonium sulphate instead of Urea for N.

•If soil is highly alkaline, chelated zinc can be applied.

•Water logging should be avoided and there should be proper management of drainage in the field.

Khaira Disease Of Rice can be disastrous for farmers whose life is entirely dependent on rice cultivation.

If this disease can be controlled at the initial stage of attack, there will be no production loss.

Moreover, We should consult with an expert. Awareness programs should be created among farmers.

Government should provide free medicine for the Khaira disease as rice is major Agriculture Product contributing to AGDP of any country.

Horizontal And Vertical Resistance In Plants