There are simply 5 parts of rice plant which are listed below:-

All these parts of rice forms a complete rice plant and they has their own crucial function in the growth and development of rice plant.

In this blog- we are going to learn about Parts Of rice Plant  And Its Function in detail. So-Read the article till the end.

Rice(Oryza sativa)  is a semi-aquatic plant(Cereal herb) of Graminae family that grows and germinates best in clayey soil with regular water supply.

This graminae  family also includes other major cereal like Maize, Wheat and Barley. Among these, Rice is 3rd most cultivated crop in world after Wheat and Maize.

Do You Know:-About 90% of rice is grown and consumed in Asia-It is the staple food of half of world population(3.1 billion people).

Rice is an annual plant(Grows and dies in one season/year) which is first raised up to seedling condition by puddling and then transplanted in other field after (22-28) days.

They have vegetative phase, Reproductive phase and after ripening the rice grains turned into Golden Yellow colour and they are harvested

The rice genus-Oryza has 24 species. Among these 24 species-22 Species belongs to wild and remaining 2 species are widely cultivated all round the globe.

The 2 species of rice that are cultivated in world are:- O.sativa(In Asia) And O.glaberimma(In Africa). The common scientific name of rice is Oryza sativa.

Seed/Grain is that part of rice plant which is processed and consumed as beaten rice in our daily life.

Rice Grain is dry seed which falls under Caryopsis(Pericarp Fused With Seed Coat). The entire grain is covered with husk/hull and is 5 to 7 mm in length.

To use rice grain for consumption-Its outer inedible husk should be removed by milling process.

Husk/Hull of rice grain consists of 5 parts namely:- Lemma, Palea, Awn, Rachilla and Sterile lemmas and it consists 20% of total weight of grain.

To grow seeding from rice grain/seed, It is sown along with its husk.

Note:- In between husk and seed there is a layer of Bran. With Bran=Brown Rice And Without Bran=White rice.

We have learned something about Rice Plant.Now-Itis time to learn about the Parts Of Rice Plant in detail.

These parts of rice plant can be easily understand by classifying them properly.

These systems together forms  all parts of rice plant. Lets learn about them:-

When the seed of rice is planted, then the process of formation of roots starts.

They provide rice plant anchorage but the roots doesn’t go deep. They reach to the depth of about (8-15)”.

The development process show 2 types of roots in rice plant which are explained below:-

These are the embryonic roots which develops from coleorhizza(Radicle With Sheath).

This is primary root and presist only for short time after germination.

The primary root of rice is also called as Seminal root and is sparsely branched.

After some period of time, Roots starts developing from node near to soil surface. These roots are called nodal roots.

These nodal roots are adjacent to soil and doesn’t go much deeper-That is why, there may be problem of lodging in tall varieties if there is no proper drainage of water.

The shoot system of rice plant develops from Coleoptile(Plumule with sheath) and consists of Culm, Leaves, Panicle and Spikelets. 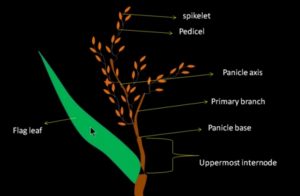 In simple words, Stem of rice is called Culm. Actually, It is long cylindrical hollow stem with alternating nodes and internodes.

The node of clum has a leaf and a bud. The node which is at the ground level starts forming new tillers(New Shoots). The final production of rice plant also depends on this tillering capacity.

The internode of clum is hollow from inside while the node is solid. Clum is smooth and the length of its internode increases as we go upward i.e towards panicle.

Function:- The main role of culm is to support rice plant and helps to transport minerals and water absorbed by roots to upper parts.

Leaves develops from each node of the culm. They are alternate and opposite in position and only one leaf emerges from one node.

There special leaf just beneath the panicle of rice called Flag Leaf which plays great role in photosynthesis.

As leaf emerges from node-It sheath(Leaf Sheath) covers the internode and grow forward.

Just above node and at the base of leaf sheath, there is a swelling which is frequently mis-recognized as node is called Sheath Pulvinus.

Auricle pair of small ear like appendages situated at the base of leaf.Ligule in rice papery triangular structure situated above auricle.

Function– Leaves are main source of photosynthesis which helps to make food.

Note:- To Distinguish Between Rice And Echinocola(Sama)- we have to observe auricle ligule. Rice has both auricle and ligule whereas Sama doesn’t have these structures.

Panicle is the most important part of rice as it determines to total grain production.

In simple-Panicles are flowers of rice. If we go by scientific term-Panicles are group of spikelets which are situated at the top end of culm/stem.

Panicle is connected to the culm by panicle base which is also called as neck.

Panicle is further divided into primary branch and secondary branch. All these branches bear spikelets.

Function:-Panicles hold spikelets which are filled after pollination and formation of grains starts.

Spikelet is structure of rice pant which contains floret(Grain) and pedicel(This Support Floret).

The flower of rice consists of a pistil and six stamens. During reproduction, palea and lemma opens.

After opening- The pollens drops into stigma which ultimately reaches to ovary and fertilization occurs and grain(Ripened Ovule) forms and harvesting is done.

After fertilization-The lemma and Palea closes. This suggests that, Rice has self pollination.

Thus- These are the Parts of rice plants and Its functions. Each part of rice has immense contribution in the development of most eaten rice.

➡️Layout Design Of An Orchard Gardening

➡️3g Cutting In Plants ( Within 5 Steps)

If You Have Any Queries-Feel Free To Ask In Comments.

Thank You For Visiting Us 😊!!