Land Preparation is the first step of any commercial farming. It includes cleaning of land, removing large stones, burning previous crops stubble, levelling, reclamation, making ridges, furrows, planking and Many More. This step is labour intensive and costly. For this, we use different land preparation tools. In traditional farming methods, people use muscle power and it takes more time to do less work. But, Especially after the green revolution, Use of different farming tools peaked.

At present, Engineers have made many Land Preparation Tools that are easy to use, portable and they are making the farm production higher. Let’s have a look at some of them. 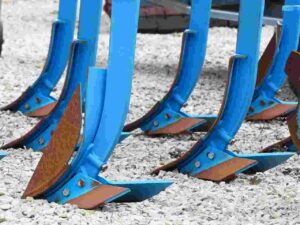 It is the most used and important tool of land preparation. It is used to plough the land, pulverize soil, remove weeds and overturn topsoil. It is connected with a tractor and runs throughout the field. Cultivator is used for secondary tillage and it doesn’t disturb the soil like a harrower. 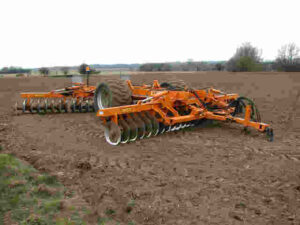 This tool contains a large disc in single row as well in double row (Double Disc Harrower). It is used to plough land, make soil very pulverized, for cutting of unwanted weeds and also for puddling as rice plant transplantation. In general, the diameter of the disc is 60 cm. Rotavator contains a blade which rotates and ploughs the land. This tool is used for secondary tillage. Rotavator is a cost-effective tool for replacing cultivators, disc harrows, and levellers. It is one of the most used tools in Agriculture. It is used in fields where seeds are to be sown by broadcast method. 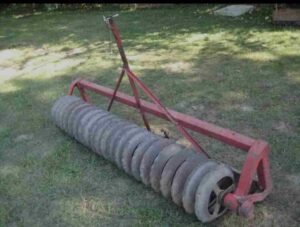 It is used to break clods, reduce air pockets, press the small stones. It makes the seed bed smooth. Sometimes, it is also used to improve the soil-seed contact in sowing methods like broadcasting. 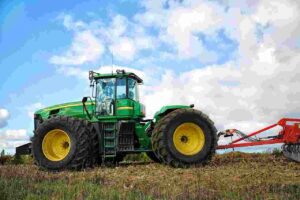 Tractor is a large vehicle which is used in many agricultural works. The tools for land preparation are attached with a tractor which makes them work. It is used to make Cultivator, Harrower, Leveller, Rotavator working. There are two types, One is a large four wheeler and another is with two wheels called a motocultor. 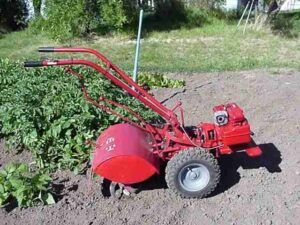 It is also called a hand tractor. The spinning blades are attached at front which plough the land and make the soil pulverized. It is cheap.

Jab Planter is a mechanical tool that is used to sow seeds especially for maize. It is handy, easy, helps to maintain seed rate and spacing. The seeds are put inside it. When a person punch it in soil, then it automatically sow and cover the seeds. It is convenient for sowing seeds in ridges already covered with plastic mulch. 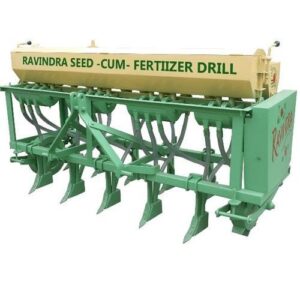 A drill in agriculture is used to sow seeds. It is a land preparation tool that sow seeds at desired depth and cover it with soil in efficient manner. It also maintains proper seed rate. It is an old tool that has been used for many years. It is operated with the help of animal power like Bull, Donkey, Horse and Make Buffalo. It contains a long wooden log which is connected with a metal piece at one one end. When animals like cattle pull the plough, the metal cuts the soil and makes furrows for seed sowing. 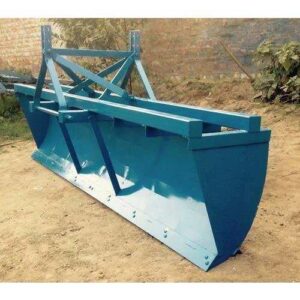 As the name indicates, It is used to level the field. The agricultural land which is slope cannot distribute the water properly no matter which method of irrigation you use. Therefore, Levelling is done which makes our work effective. 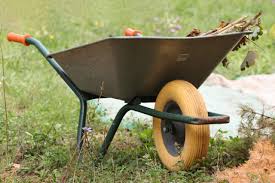 It is used to transport materials from one place to another. It contains a wheel which makes our work easier and faster. A rake is a hand operated land preparation tool that contains a long handle with a comb like toothed bar at one end. It is used to collect hay, leaves and also to make soil loose. 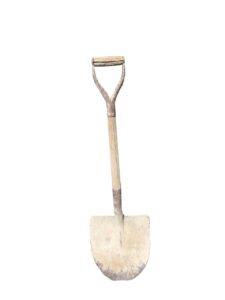 We all know shovels. It is used to lift bulk soil, sand, stones and in making pits. It is also used in soil sampling. 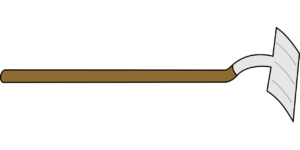 This tool is commonly used for land preparation and other intercultural practices. It is especially used to remove the weeds, piling up the soil, create small furrows for seed sowing, shape soil, remove weeds, clear soil, and harvest root crops. It also contains small teeths and is especially used in gardening for making seed beds. It is handy and easy to use. It is also used to make soil loose which improves the aeration. It is another handy land preparation tool which is especially used in gardening. It is used to loosen soil, remove weeds, to level seed beds and mix the soil and manure like vermicompost. Ridger is used to make ridges for row crops like Banana, Vegetables, Pineapple Farming. It makes alternate ridges and furrows by cutting the soil and turning it into opposite direction. Ridges are placed to plant while the furrow acts as an irrigation channel. It is used at final land preparation after primary tillage, secondary tillage and land leveling when land contains slight moisture.

Thus – These were the most commonly used land Preparation Tools.

Vermicompost is an organic manure that is prepared by the decomposition and degradation of bio wastes with the help of earthworms. The earthworms are given organic material to eat, After consuming the organic material, they excrete making highly nutritious vermicast. The process is called Vermicomposting. It is a fast process. The things that need 1000…

Benefits Of Being Vegetarian:-Being a Vegetarian is something that can make us feel different from others. People choose to become a vegan due to many reasons such as – Health Issues, Moral Values, Religious Beliefs, Economic, Ecological and sometimes due to Dietary concern. There has always been a nutritional debate on, Which is good- Veg…

Fall Armyworm ☑️Fall Armyworm(FAW) also known as American Fall Armyworm is voracious pest which commonly feeds on maize plant causing huge loss to crop production. FALL ARMYWORM Fall armyworm has now emerged as one of the epidemic in agriculture and food sector. Million hector of land where maize is cultivated has totally affected and destroyed…

Farming On Rooftops sometimes called as terrace farming/rooftop farming can be understood the process as growing Vegetables and fruits in roof of concrete building where there is less availability of land and space. It is one of the excellent way of getting healthy food at our own home.   Eating healthy , fresh vegetables and…

Narra Tree Narra Tree is one of the largest trees in the world grown for its superior quality wood. It is native to Southeast Asia, Northern Australia and Western Pacific Islands. Though it is found in different parts of the world, IUCN has listed it as an endangered plant. It is extinct in Vietnam, Srilanka…