The climate on Earth is changing, this is undeniable. Presently, climate change is a major concern for the whole world, and Nepal is no exception. Everyyear, international conferences are held and billions of dollars are spent on tackling this global issue. Those of you who don’t know about the climate and how it is changing, don’t worry. I’m here to open your minds.

Climate refers to a typical weather pattern of a place over a long period of time. Alternatively, it may also be understood as the summation of weather conditions over a large area and long time. Meanwhile, the weather describes the state of the atmosphere right now.

The term ‘Climate Change’ refers to a long-term change in temperature and precipitation patterns resulting in altered climatic conditions. According to data, Nepal is the 4th most vulnerable country to climate change. According to the National Adaptation Program Of Action (NAPA), 29 districts in Nepal are prone to landslides, 22 districts to droughts, 12 districts to flooding, and 9 districts to GLOFs.

There are two causes of climate change which are explained below:-

The Earth’s climate is changing naturally, but at a slow rate. The effects of natural causes are not catastrophic. Natural climate change has been occurring since the beginning of time and living organisms can easily adapt to it.

Climate change has impacted a wide range of areas. In this article, we will focus on the impact of climate change on agriculture. Some of the impacts are listed below:- 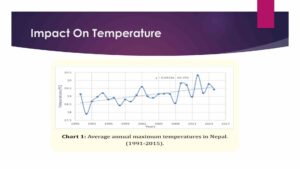 This temperature rise has both positive and negative effects on Agriculture:-

•Decreasing surface water: As the temperature rises, evaporation increases. This is causing small rivers to dry up. As a result, Irrigation is hindered, and many people are forced to deal with droughts and desertification.

•Less Production: When the temperature increases, the maturation time for a crop decreases, which leads to less production. Furthermore, with less water available, the plant can’t give the best results.

•Farmers cannot work in the field due to high temperatures. Normally, we were able to work easily during June/July, but now with intense heat we are unable to do so.

•Farm animals, especially exotic animals like the Toggenburg goat, suffer from heat stress. As a result, their production decreases, and a farmer is forced to bear the loss.

•With 1°C increase in temperature, 20% snow is lost. This results in glacial lake outburst flood(GLOFs). Nepal has experienced 24 GLOFs in the past which has caused huge damage to the Animal, People and Economy. The temperature rise in Himalayan region is more rapid which can be seen in the graph below:-

As temperatures rise, the varieties previously unable to grow at high altitudes can now be grown since they aren’t subject to chilling injuries.

We can see that Rainfall pattern has become unpredictable over the last few decades. The timing, amount, and distribution of rainfall have all changed significantly. The rainfall has become erratic. Numbers show that mean annual rainfall in Nepal is declining by 3.7 mm per decade. 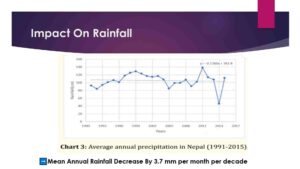 •Agricultural production in Nepal is largely dependent on Monsoon rains. Farmer’s are unable to prepare for paddy cultivation due to unpredictable rain.

•Loss of fertile topsoil. Every Year, 60 cm of topsoil is swept to Bangladesh from Nepal.

•Flood And Landslides: Every year Due To Erratic Rainfall, Flood and Landslides occurs which destroys human life, Properties and Thousand Hectare Of Agricultural Land.

Different kinds of pests increase due to climate change. Climate change is responsible for the desert locusts seen in India and Nepal in 2020. These pests are extremely destructive. They consume our Crops, Fruits, Foliage. Not only new pests, Climate Change contributes to increase the metabolism of insects which cause more destruction of crops. With 10 °C Increase In Temperature, Metabolic Rate Of Insects and Pests Doubles Meaning They Consume More Agricultural Crops

4. Impact On Economy And Livelihood

66% of Nepalese are directly or indirectly involved in Agriculture. With climate change, They aren’t able to get maximum production which is making it difficult to solve hand to mouth problems especially for marginal farmers. Flood And Landslides Swept Away The People’s House, Farm Animals and Other Properties leading To Mass Migration. The Government Of Nepal is allocating a huge amount of Budget to address Climate Change. (NRS. 393.33 Billion Spent In Year 2017/18).

Despite the change, people still need to survive. The Earth is our home. It should be protected. We should adapt according to the changing situation. People are using different new and innovative ideas to tackle with changing climate. Some adaptation on farmers level are listed below:-

•Intercropping:- Preserve Loss Of Top Soil and Helps To Do Farming On Slope Areas

Some adaptation program from national level are:-

Government of Nepal is allocating high budget to tackle with climate change problem. They are encouraging the people for organic farming and for the conservation of natural resources. Government in cooperation with different NGos and INGOs has formed different Policies regarding climate change. For eg: Nepal’s Climate Change Policy (2011) Revised In 2019

Some organisations working for mitigation of climate change in Nepal are listed below:-

Some programs regarding the climate change in Nepal are:-

Hariyo Ban Nepal is a Program contributing to reducing the effects of climate change at community level. It is an approach set up with the combined efforts of WWF, CARE, NTNC and FECOFUN. This program was initiated on 15th July, 2016 as a five year program plan. It mainly works on Biodiversity Conservation and Climate Change Adaptation.

Climate smart Agriculture is another great way of adaptation with changing climate. It is a holistic approach of managing and changing the agricultural activities according to the changing environment. Some CSA approaches are:-

✓Integration of modern technologies in agriculture to increase water, nutrient and input use efficiency.

✓Integration of digital media to disseminate the Information rapidly. It helps to alert the farmer about the possible loss.

Policies Regarding Climate Change In Nepal

Climate change is real. It will be a major issue in the future. We must be prepared for a devastating future if we do not take the right steps at present. Government and organisations do not have all the responsibility to solve this issue, we at the individual level also need to take part. In Nepal, Agriculture is the main source of livelihood. As a result of climate change, Agriculture is facing huge problems. Therefore, farmers should be made aware of climate smart agriculture.

Author:-
Mr. Prakash Bhattarai is an Agriculture student at Agriculture And Forestry University, Nepal. He has keen interest in Agriculture, Gardening, Farming. He is also the founder of the blog, Agricultural Guide

Bsc Agriculture Entrance Syllabus Bsc Agriculture is becoming one of the top priority of Nepalese students after completion of +2 education. With growing interest, competition level is also getting high. Every Year thousands of students appear in entrance exams and only few hundreds secure the position in merit list. This is because some study hard…

Hydroponics Farming Farming system in the agricultural world is changing day by day as more advanced and innovative technics are being introduced. One of the innovative and magical way of farming that is growing popularly in world is soil-less culture. Fact:- Soil is not necessary for crop or plant to grow instead nutrient in soil…

Ajwain Plant Ajwain Plant also know as Bishop Weed or Carom in english is a remarkable plant having multipurpose use. The rich biodiversity of the earth has made the availability of different types of plants. Each plant has its unique use. Some plants have medicinal properties too. Ajwain, known as jwano in Nepali is a…

Phosphorus is an essential plant nutrient. Soil should be rich in phosphorus for the proper growth and development of crops. However, if the soil is deficient in Phosphorus, application of phosphorus is recommended to farmers. Many types of Phosphate fertilizers are available in the market. Among them, the most common and widely used fertilizer is…

Mushroom farming in Nepal is increasing at rapid pace and has helped many youths to start their own business. Nepal, Being an agricultural country its  majority of population(66%) is engaged in agriculture. Despite of  this much population involved in agriculture,the domestic production  does not meet the annual demand of the country and  import of food…