Dipladenia Rio is a tropical plant that nurtures beautiful flowers. It grows more like a bush. It’s an evergreen plant originated from Brazil in South America. Its leaves are sharp and pointy. It is also glossy and possesses an emerald color.

Dipladenia Rio which traces its origin to Brazil is also called “Brazilian Jasmine“. It can grow annually and perennially depending on the season. In winter, it’s grown as annual and in summer it’s grown as perennial. 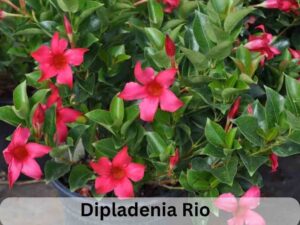 Its stem is green and juicy. The more it develops, it becomes Woody and supports the plant structure better. It grows downwards and hangs. This causes the plant not to invade space. The color of its flowers is radiant. They also appear in a trumpet-shaped form.

They can be grown in flower pots, ground (garden), or hanging baskets. Each leaf can be 3 to 8 inches long. It’s alternately aligned on the stem which produces a serried appearance. They’re waxy and smooth. Its foliage is deciduous and its flowers are appealing. Both can be preferable depending on the individual. It can thrive indoors and outdoors depending on the season.

The plant is not edible. When consumed causes mild indigestion in humans and animals. This is why it’s best to keep it out of reach of children and pets. It’s also necessary to put on gloves while tending to the plant. Wash your hands after tending the plant as it’s irritable to the skin.

Dipladenia Rio isn’t invasive. It doesn’t harbor anything harmful or life-threatening. It’s not a rare plant. It could be found anywhere but mostly in South and Central America. It can also be found in the Southwest United States, West Indies, and Mexico. Dipladenia could also be called “Mandenvilla”.

It beautifies and adds bright colors to the spaces and surroundings in which it’s situated. It could be the garden, gallery, balcony, platform, etc. Dipladenia Rio can survive during summer. This is because it’s highly tolerant to heat. It doesn’t require much effort in maintaining them. They attract insects such as bees and hummingbirds. They do not need much watering. This is so because water is already stored in the form of a tuber. This is below the soil for the plant to use when it’s dry.

Dipladenia Rio comes in different colors of flowers. They are dark or deep red, white and pink blossoms. The flowers mostly have a color that’s distinct in the center. It could be yellow or red. Even though it’s one of the easiest plants to grow, it doesn’t have fast growth. It takes 20 to 22 weeks to grow depending on the container size.

‘Dipladenia Sanderi’ is the scientific name for Dipladenia Rio which was originally called ‘Brazilian Jasmine’. The scientific name was later changed to ‘Mandevilla Sanderi’. It belongs to the family of ‘Apocynaceae’. It also yields a flower that contains seeds in the carpel which is ‘angiosperm’.

Dipladenia Rio is not considered toxic but the sap could irritate the skin and animals if ingested. It’s necessary to keep it away from pets and kids. 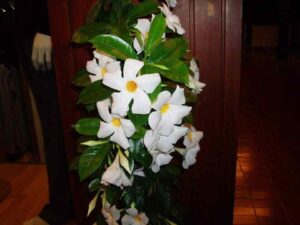 This Dipladenia plant looks classy and exotic. What makes it distinct from others is its bright glistening white bloom with a yellow heart. It’s a houseplant that beautifies the surroundings. It yields flowers mostly during summer. 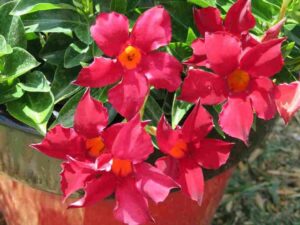 This is an evergreen plant from the family of ‘Apocynaceae. It also serves as a flowery plant that brings beauty to the space in which it’s found. As the name implies, Dipladenia Rio Deep Red blooms deep red flowers. It’s no different from others aside from the color of the flower.

Four to six hours of sunlight a day is relevant. This is to make the plant bloom effortlessly and graciously. Without light, they can’t produce flowers and their leaves change color. This means they’ve started drying. Excessive sunlight isn’t good for the plant. This is because it might result in it drying off.

Dipladenia Rio can survive in different climates. It just has to be at a temperature that’ll be suitable for it to grow well. During winter it Should be moved indoors and watered sparsely to avoid the root getting rotten. The plant thrives more in a warm environment. The temperature should be between 50 to 95 Fahrenheit for the plant to grow well.

Dipladenia Rio should be planted in fertile and well-drained sandy soil. This soil contains organic materials essential for plant nutrients.

During the early stages of the plant’s flowering and growth, the plant requires enough water. The plant can be watered every 8 to 10 days once the initial stage process must have been fulfilled. Dipladenia Rio needs water, especially during summer.

This is not significant in Dipladenia Rio, the only necessary thing involved is misting. This is spraying droplets of water which is only carried out during the dry season.

Fertilizing of the plant should be carried out once a year. This is because some soil must contain fertilizers.

Potting entails putting your plants in a container rather than outside it in the garden. When it’s potted it becomes your responsibility. You’re to watch it with utmost care. Make sure it gets the sunlight and ensures that there’s water for the plant. Reporting is actually when the plant is transferred into another container. This is after it completed its annual growth during the winter season.

Dipladenia Rio can be trimmed when desired into a well-shaped plant. Trimming isn’t really necessary for the growth of the plant. Since the plant isn’t of high maintenance, pruning only comes in when the leaves are dead. There’s a need to get rid of them.

Cutting is the simplest way to propagate Dipladenia Rio.

In this method, the parent plant feeds the new plant with its nutrients as it emerges.

The price of the plant differs depending on the sites it’s sold in. Since it’s a rare plant it runs out of stock quickly in most sites. Its regular price is $44.99 but could be sold at the rate of $34 on Amazon.

This disease is caused by distinct bacteria and fungi. They dwell in the leaves to feed on their tissues. When yellow and brown spots are found in the leaves, it’s a clear indication that the microscopic germs have created their habitat in the leaves.

Most times, the spots spread over the leaf. This is due to the massive state of the bacteria. This eventually leads to the death of the leaf thereby slowing the growth of the plant. However, Need oil can be used to curb the disease from spreading as well as leaf spotting.

A Bacterial Pathogen called “Agrobacterium tumefacians” is responsible for this disease. It occurs when there’s swelling in the tissues of the plant base. When the call is expanded, it creates nutrient flow within the plant from the root and limitation of fluid. The affected plant must be destroyed quickly as there’s no remedy to the disease.

This takes place when the soil is wet. It encompasses mold on the leaves and stems. This brings about wilting of foliage and stems rotting. It releases a yellowish pigment in the sap which causes toxicity to the plant. Thinning can be employed to take out the affected plant.

This disease is very rare. It causes the leaves to be yellow at first and later changes to brown. If it isn’t controlled early, the leaves fall off and this leads to the death of the plant.

This is a serious disease caused by Fungi. It occurs when the leaves turn yellow. If it’s noticed and controlled early, it can survive but if it’s too late, it can ruin the plant.

Dipladenia Rio blooms continuously every year. This makes the plant appealing and befitting for an ornament. Without it being affected by a disease it can cause wilting, and it blooms all year round.

Dipladenia Rio stores water in its tuber which is found in its root and this helps to prevent the plant from falling off and wilting especially during the dry season. The water stored in its tuber AIDS in the blooming of the plant and keeps it attractive.

Dipladenia Rio is not regarded as a poisonous plant but if touched without gloves, the sap can irritate the skin. It’s not to be ingested and it’s not safe for pets and humans, especially kids. That’s why it’s necessary to keep it out of children’s reach.

Most times when the weather is cooler than usual it affects Dipladenia Rio causing their leaves to turn yellow. Lack of sufficient water can cause this too, as well as mites. These are microorganisms that can’t be seen without the use of magnifying glass or hand lens. They are microscopic.

Root rot is another disease that’s contracted by Dipladenia Rio. This is caused by using the wrong soil in planting or overwatering the plant. Regardless of these, Dipladenia Rio is a shrub. It is tolerant to drought and it blooms non-stop flowers all season long. This is why pollinators are attracted to it. When tended properly, it grows to become an evergreen beauty and a center of attraction.