Parijat Plant also known as Night Blooming Jasmine or Coral Jasmine in english is an ornamental tree having  immense medicinal potential and is commonly used in Ayurveda and Homeopathy. It is also grown for both floral and foliage beauty.

Parijat is  native to southern Asia and is also found in Nepal, Pakistan, India and Thailand. This is mostly found in the tropical and subtropical regions of the world. It is commonly known as night jasmine and is the member of the family oleaceae. The genus  of Parijat tree is Nyctanthes which originated from the Greek word ‘Nykhta’ meaning night and ‘anthos’ meaning flower. Nyctanthes means night blooming flower.

The flower of this plant is the official flower of the state of West Bengal, India and Kanchanaburi province of Thailand. As the flower of parijat plants loses their brightness during  the day time, so they are also known as “tree of sorrow”. The tree is tall reaching upto the height of 10 m. Every part of this plant has medicinal properties and is popular in local areas. The tree is a terrestrial, woody, perennial plant with a life span of 5-20 years.

It is known with several names throughout the world. It is known as Parijata in Sanskrit, har-singhar in Hindi and night jasmine in english. Locally, It is also known as Rat Ki Rani meaning Queen of the Night. The vernacular name of this tree are:-

Some people also think that it is not good to grow Parijat at home but it is not so. One can grow this plant at home in the pot. However proper care should be taken for growing the plant successfully.

As a result of samudra manthan, many-things came out of the ocean. The Parijat plant is also one of those things. It is believed that both the gods and demons wanted this tree but lord Indra took it away. After this lord Indra planted this plant in Indrapuri. This plant was brought to earth by Arjun.

Some mythology also states that this tree originated from the ashes of Kunti. There were many other myths about the origin of the Parijat plant.

The name Parijat has different meanings in different languages and countries. In Hindi it is known as celestial coral tree. Parijat also means fragrance and descended from/celestial.

Under Botany, We will discuss about the flowers and leaves of Parijat Plant. 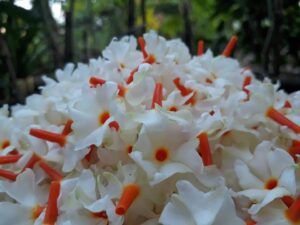 Parijat bears small slender flowers. Flowers mostly posses 6 petals and flowers with five, seven and eight petals are also found but are rare. Calyx of this flower are (6-8) mm long and corolla are glabrous. Flowers are mostly bisexual but in some plant are polygamous. Rat Ki Rani begins to flower from late September and bloom till december. Flowers generally bloom late in the evening or during night. So, At Night time, there is a strong and pleasent fragrance near the parijat tree. The flowers are white in colour with orange pedicle.

The uniqueness about the Parijat is that, they fall on ground during morning and daytime. They don’t bear any fruits like other plants. There is a religious story behind it, Once Satyabhama, Krishna Wife saw this flower in her backyard. She immensely liked the fragrance and beauty of the flower. So, She demanded her husband, Lord Krishna to bring that flower for her. Later, Krishna got to know that the flower is in heaven with Lord Indra. So, He went to heaven and take a tree with him. But, When Lord Indra saw Lord Krishna taking the flower, He stopped him and there was a fight between two gods. When krishna wins he takes the flower. But, Lord Indra have curse that this plant willn’t bear any fruits.

When parijat flowers falls on ground, there is a beautiful scenario. A beautiful landscape is formed. If you haven’t seen this, You can compare it with Gulmohar Tree flowers. It is the only flower in the world which is offered to the god after picking it from ground.

The leaves of Parijat plant are opposite, ovate with serrated or entire margin with long and hairy petioles measuring upto the length of  5-10 mm. Parijat plant leaves have unicostate and reticulate venation. Lamina is ovate with cute apex.

The ideal temperature for Parijat plant is 20-25 degree celsius. It cannot survive in low temperature.

The plant requires more than 6 hours of daily sunlight. So, Open places are best suited for this tree.

Standing water in the pot is harmful to the plant. So proper drainage should be ensured. Parijat tree should be watered thoroughly during summer but the Watering frequency should be reduced during winter. About 200 ml water should be  applied when the top 1-2 inch of the soil feels dry.

The top soil in the pot should be loosened without disturbing the roots and the Parijat Tree should be fed with organic matter once a month. Water should be applied immediately after fertilization. It is good to feed the plant with at least 1 kg of vermicompost or home made well rotten compost twice a year.

Training and pruning are essential horticultural operations in this plant. You can train your plant to give it the desired shape. Training of  the plant starts from the seedling stage. Pruning involves the judicious removal of plant parts. Diseased, old and branches with lower crotch angle are pruned regularly.

Parijat plant can be propagated through seeds or from stem cutting. For growing it from seed, prepare a potting mixture containing equal proportion of normal garden soil and compost. After mixing it thoroughly, fill the germination tray with this mixture. Seed should be  sown at a sowing depth of 2 cm and do not put more than a seed in each section of the germination tray. Adequate moisture should be provided but the over watering should be avoided. Germination starts within 7-14 days of sowing.

Transplantation of these seedlings should be done at 4 to 5 leaf stage.

Parijat is a sacred tree. So it is important from a religious or spiritual point of view. According to Hindu mythology, Lord Indra planted this tree in Indrapuri and goddess of wealth, Laxmi also loves this flower.  This flower is considered to be the favourite flower of Lord Bishnu.

Plants not only energize our surroundings but also add aesthetic appeal. They are visually alluring as well as maintain a peaceful environment. Since, the science of Vastu shastra is applicable to the indoor plant. It is good to place the plant in an appropriate place. According to vastu, Parijat plant should not be planted in southwest, northwest or east directions.

Leaves of parijat plant are used to treat diseases like rheumatism, chronic fever and internal worms. The mixture of leaves juice and honey are used to cure cough and fever. Leaf juice is also used for treating digestive problems. The leaves of this plant are rich in laxative, antibacterial, anti-inflammatory, anthelmintic,diuretic and diaphoretic properties. The leaves of this plant are also used to get relief from spleen enlargement.

Parijat plant or Rat Ki Rani has many uses. Some of them are mentioned below:

Thus – Parijat plant is a remarkable gift from mother nature. This tree is associated with our beliefs and has great aesthetic beauty. You cam grow it in your garden for the best view.

Stone Lotus Flower: Gardeners like me love to grow succulents for their eye-appealing foliage beauty. While growing these succulents, we need to be well aware of their growing requirements. If we don’t care for them properly, we may lose our plant. We don’t want that to happen, right? What if we are provided with easy…

Looking to add some new life to your garden? A string of frogs may be the perfect addition! These little guys are easy to care for, and they can brighten up any space. In this guide, we will provide everything you need to know to get started with a growing string of frogs. We’ll discuss…

Money Plant Money plant is a monocotyledonous flowering plant belonging to the family Araceae, native to Southeastern Asia and New Guinea. This beautiful indoor plant is popular with different names like Pothos in English. Some other common names are:- Golden Pothos, Devil’s Ivy and Devil’s Vine. The name Money Plant is given due to the…

Shevanti Flower Shevanti flower also known as Chrysanthemum in english is widely grown flower that has secured the second position in desirability after Rose. For gardeners like me, who are always seeking the best-looking flowers for their garden, this flower can be the best choice because of its exquisite beauty and a wide variety. To…

Philodendron Subhastatum Philodendron subhastatum is a rare tropical climber philodendron grown particularly for their bi-colour foliage. They are the evergreen species bearing large glossy leaves all year round. Their leaves are dark green with a red underside. Their foliage colour becomes more prominent with maturity. These exceptionally beautiful foliage plants are preferably used to decorate…