As the summer begins, It brings the tranquillity and beauty of gulmohar tree in all lands from decidious to tropical. Almost all the countries in the world are beautified with this magical tree. Whether it is with magnificent flower beauty, or with its fern like green foliage, Gulmohar tree has always stood to disseminate the joy, happiness and calmness. 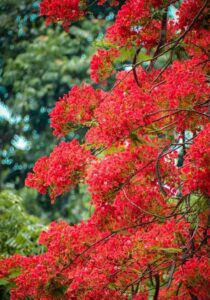 Gulmohar tree is an ornamental plant which is grown especially for its amazing flower beauty though this plant also got beautiful almost evergreen foliage beauty and many medicinal uses.

It iss native to dry deciduous region of Madagascar. This tree was originally discovered by the Botanist named Wensel Boker during the 19th century. During that time, this tree was found abundantly in wild of Madagascar, but later, The population of Gulmohar tree started decreasing rapidly in it original home and it was started to grow in other places. It is wild endagerious but locally it is found abundantly.

Despite of its original home have dry deciduous climate, This tree is now grown abundantly in tropical and subtropical region of North America, Central America, Caribbean, Middle East, Europe and Asia.

This distribution of Gulmohar tree in different parts of planet earth is due to it ornamental use and good adaptability. Now – This tree is considered as the most beautiful tree in the world. Gulmohar grows fast to attain the height of around 40-45 ft in its lifespan of about 40 years. The trunk go straight and bears branches which forms umbrella like crown. Sometimes, the diameter of the branches becomes wider than the tree height. With this large canopy, This tree offers shade to those who are seeking for rest during scorching sun of summer.

Despite being semi-decidious, It remains evergreen though it drops its leaves in areas with long dry or drought period.

In present situation, It is national flower of St. Kitts, Nevis. Gulmohar has also secure it’s position as official tree of Commonwealth of Northern Mariana Islands. It is also a city tree of Tainan, Taiwan.

This beautiful tree has got several beautiful names. It is known by different names all over the world. It gets its name due to different reasons, some of which includes it’s appearance while other are due to its cultural connection and some stories. However, It is known as Delonix regia worldwide. Some of the most commonly used alternative name of this tree are:- Flamboyant, Peacock flower tree, Pupil’s tree, Flame of forest, Flame tree.

The reason for calling Gulmohar tree as Flame Of Forest is due its Spectacular orange-red flowers which somewhat gives the view of Fire colour/Fire in forest.

It is commonly called as Flamboyant. The literal meaning of Flamboyant is showy or bold in appearance.

In english, Gulmohar is known as Royal Poinciana.

Gulmohar tree is scientifically known by Delonix regia. This tree falls under the bean family, Fabaceae. This is same family which includes legumes. As there is no nodulation in gulmohar, this tree is known as non-nodulating legume. The botanical classification  is given below:-

Under botany, We will learning about the flower, leaves and stem of this tree.

The main attraction of Gulmohar tree are its flowers hued with different chromas which are truely eye appealing and glamorous.

The flower contains five different petals, Four being at base and one is large of other four. The four petals are called Scarlet and the large one  is called standard.

The scarlet are hued with beautiful Orange-Red colour which is most responsible for its Spectacular beauty. The larger one i.e Standard is variegated with yellow and white. During maturity time, the Standard petal also becomes red. The close-up image of gulmohar flower is attached below:- 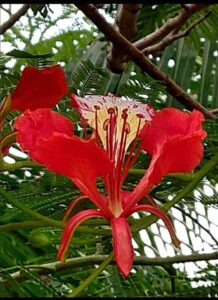 Note:- Most of the varieties has Orange-Red colour. However, There is a variety called Delonix regia var.flavida, which contains yellow flowers and is rare.

As the flower are colourful, they attract the honey bee. We can see lots of bees during the flowering season. The tree usually produce flowers with the onset of Spring and Summer.

During this time, the Gulmohar flowers falls on the ground and make the carpet of flower. This type scene can bound any person to stop and enjoy the temporary landscape formed by fallen Gulmohar flowers.

Some ask that, Is gulmohar flower edible? The answer is yes, Gulmohar flower is edible. The sweet taste of flower makes the children attracted towards it.

The fruit of Gulmohar tree is called pod. It contains hard and brown seeds from inside which are widely used in propagation of this plant. The pod is green and flaccid during early age and later they turn into hard, dark brown and woody.

After maturation of Pod, It dehisce into two parts which cause the dispersal of seeds. The seeds inside the pod are small weighing about 0.4 gm and 2 cm in length. After dispersal of seeds, under favourable condition, They grow and form a complete tree. However, Most of the seed doesn’t germinate due to the physical dormancy i.e Due to hard outer covering of seed.

The leaves of Gulmohar tree are compound leaves also known as double pinnate leaves (Feathery).They look like the leaves of fern with bright light green colour.

The leaves contains primary and secondary leaflets. These leaflets support the cluster of flowers.

The leaves remains green no matter which season begins. This makes Gulmohar near evergreen tree.

As this tree is decidious, The leaves falls as the autumn starts i.e during November time. However, the fallen of leaves doesn’t make the plant naked as some leaves remain intact. During flowering, whole plant is covered with flowers with less number of leaves.

The stem is single and grows tall very fast attaining the ultimate height of within the period of    The height of Gulmohar tree reaches upto (8-15) meters or (30-40) feet. Similarly, The canopy or Spreadness during maturity is (10-15) meters. That’s why, It gives vase like appearance. The wide spread crown of Gulmohar gives it a shape of letter “T”, which makes it suitable to be used as street tree.

The gulmohar tree grows about five feet per year. This is very fast growth as compared to other ornamental trees. The stem is woody throughout its lifespan.

The roots of the tree are shallow. So – During high speed wind, there is chance of fallen of tree or the breakage of trunk.

Most commonly, Gulmohar tree is propagated by two most popular methods i.e From Seeds and From Cuttings.

Gulmohar grow naturally or by man from the Seed. It is the most commonly practiced method. After pollination, there is a formation of Pod/Fruit. At early stage, the pod is green, As it matures the colour changes to brown and it dehisce into two parts releasing hard brown seeds.

The seeds of this tree possess Physical dormancy. They have hard hard outer covering. Without the breakage of this outer cover, the germination of the tree is nearly impossible. So- Before sowing seeds, we follow Scarification method to break the dormancy by making it outer covering soft. For this, We can soak the Gulmohar seeds in warm water for 24 hrs OR, we can make small scar in seed with the help of knife. This ensures the entry of Water and Oxygen inside the seeds ultimately resulting in germination.

If grown from seed, Gulmohar tree takes about (5-12) years time to reach upto the flowering potential. The germination time of Gulmohar from seed varies greatly. It can takes from (12-349) days to germinate. If we do the process of breaking the dormancy as mentioned above, germination occurs within (10-12) days otherwise it can take up to 349 days.

Growing Gulmohar tree from cutting is less in practice but it is as effective as growing from seed and posses some advantages. In gulmohar, Semi-hardwood cutting is preferred. That means, cutting should be taken from the current season or previous season branch which was growing in the side of sunlight. The branch should be healthy. The cutting should be about 30 cm in length with (2-3) nodes. While cutting, the cut should be made in slanting position.

After cutting, We can dip the section into the Rooting hormone like Auxin, as it ensures the fast root initiation. After dipping, It can be planted in moist soil. After some days root initiates and leaves appears.

Propagation from cutting results in true to type new plant. It is best for yellow flowered Gulmohar tree. The main advantage of growing this tree from cutting is, It gives flower faster than that grown from seed.

Gulmohar tree prefers deep sandy loam soil with proper provision of drainage. Though it can be grown in almost all type of soil, Heavy and clayey soil should be avoided. Soil should have good warmth.

The tree can be grown upto 2000 meters ASL in an area with a mean annual rainfall of 700 mm and temperature of about (14-26)°C. It is the tree of tropics and sub-tropics but can withstand the heat and humid conditions. There is no problem of irrigation as it is fairly drought and salt tolerant plant.

The place selected for the growing of Gulmohar tree should have enough space as it spread up to 15 meters forming an umbrella like crown. The site should receive enough sunlight and grows weakly, sparsely under shade.

As the plant spread and grows very fast, we can do regular pruning to give it the proper shape we want. If we allow it to grow and think of controlling it growth at later years, It will become very difficult and ultimately it covers large area. This can be a problem if you are growing Gulmohars at home. The tree is resistant to pests however some animals and insects drills holes it is branches which should be controlled otherwise the tree may collapse during storms.

The bonsai of Gulmohar tree looks amazingly beautiful. Bonsai is the miniature form of tree which is grown in a shallow container. If you want to make Bonsai of this tree, then it should be subjected to heavy training and pruning. First, the seed should be shown and allowed to grow for one year. After one year, It should be subjected to pruning and training. Limiting the amount of food and regular working on it will result in cool bonsai in few years.

Despite being used as ornamental tree, Gulmohar has lots of other uses which makes it truely a gifted plant. Some of the uses  are listed below:-

Though Gulmohar tree is truely a remarkable plant and offers great beauty, it do have some demerits. Here, We have listed the main disadvantages you may face during the growing of this tree:-

Gulmohar tree, is gift of mother nature to all living beings. Whether with its unique beauty or by its multipurpose uses, Gulmohar tree has always make the life of every person better. Therefore, It is our duty to protect magnificent beauty of this tree.

What Is Sustainable Agriculture? Methods, Advantages And Disadvantages

Anthurium Magnificum: All You Need To Know