Taungya System is a type of  Agroforestry system where the temporary food crops and permanent forest trees are grown simultaneously with the ultimate aim of developing a well established forest in future. Earlier it was a kind of shifting cultivation. People used to locate a forest, Clear or Burn it and start cultivating on the exposed fertile land. After growing agricultural crops for a few years, they left the place and started to grow food crops by clearing the next forest. However, This system of shifting cultivation wasn’t sustainable and there was much soil deterioration. In that scenario, Shifting cultivation was modified to form the Taungya system. 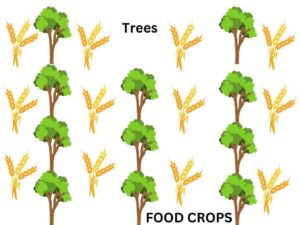 What happens in the Taungya System is, People cultivate food crops in forest land but without destroying or clearing the forest trees. This increases the production as well as protects the forest. However, There is one modified form of Taungya System where the existing forest is cleared and new forest trees are planted simultaneously with food crops. No matter what, Growing forest is the ultimate main aim of Taungya.

This system was developed in Burma in 1856. Later, People residing in Chittagong and Sylhet [Now Bangladesh] started to follow this system of forest establishment during the 1870s . It was brought to India by Sir Dietrich Brandies  in 1890 and the first cultivation was done in 1896 in North Bengal. At present, It is practised in states like Kerala, West Bengal, Orissa, Karnataka and North eastern hilly region.

The term Taungya is made up of two different words, Taung and Ya. Taung means Hill and Ya means Cultivation. This suggests, It is a method of hill cultivation. This system somehow works as Multilayer Farming

There are 3 types of Taungya System based on the ownership of the forest. These are:-

Ownership is under the Forest Department. Daily paid labourers are employed to work.

Ownership is under a person who pays high price of land and bears the cost of production.

Ownership is under the village people. Usually, the people settled down in a village inside a forest raise the crops. Each family is allocated the land area of 0.8 – 1.7 ha.

List Of Trees And Agri Crops Used In Taungya System

Note: In some cases, Forest isn’t cleared down. The food crops are planted in between the trees where there is availability of space.

2. Desirable timber crops are planted in rows by maintaining more spacing between the rows.

Now, the suitable food crops are selected and planted simultaneously in the space between the two rows of timber crops.

3. These food crops are planted for initial (1-3) years until the permanent trees become dense and cast shade.

4. After 3 years, only the trees are allowed to grow. After the harvest of the trees, Same process is repeated.

Note: Sometime the trees aren’t harvested. The established forest is left as it is after 3 years and food crops are now planted in separate forest land.

Furthermore, The picture below gives the clear idea about both Shifting Cultivation and Taungya System.

In summary, Taungya system of cultivation is a good example of an Agroforestry system. This system helps to develop a forest and contributes to biodiversity. This system has somewhat become a necessity for some people living near the forest area. Therefore, People should be allowed to practice this form of cultivation. However, shifting cultivation should be banned.