Phosphorus is an essential plant nutrient. Soil should be rich in phosphorus for the proper growth and development of crops. However, if the soil is deficient in Phosphorus, application of phosphorus is recommended to farmers. Many types of Phosphate fertilizers are available in the market. Among them, the most common and widely used fertilizer is Single super Phosphate(SSP).

Single Super Phosphate contains only one nutrient i.e. Phosphorus. So, it is a simple fertilizer having the chemical formula Ca(H2PO4)2.2H2O (Monocalcium Phosphate Dihydrate). In SSP, the phosphorus is in the form of P205 and contains 16% P2O5. Besides phosphorus, Single Super Phosphate also contains some amount of Sulfur, Calcium etc. So, It can also be beneficial for Sulfur deficient soil. 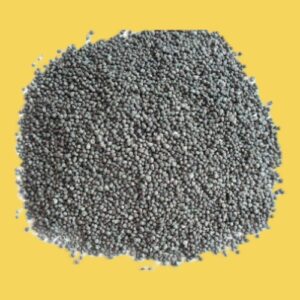 4. It consists of about 85% water-soluble phosphorus.

5. It is slightly hygroscopic.

6. It is a water-soluble phosphate fertilizer.

7. The residual effect of phosphate fertilizer is acidic.

The raw materials required for the manufacturing of SSP are:-

The reaction involved in the manufacture of Single Super Phosphate is as:-

1.Blending and grinding of Rock Phosphate

Depending upon its origin, the mineral content of phosphate rock varies. The phosphate rocks are mixed in the blending plant to produce a product of 15% phosphorus concentration. The particle size is reduced by passing the mixture through a hammer mill which converts particle size to 0.5 cm or less. The coarsely ground rock is then passed through an air swept roller mill (Bradley Mill) to attain a rock grist of approximately 75% less than 75 microns.

The reaction between ground rock and sulphuric acid is carried out in a horizontal mixture. The ingredients are used per hour are:-

This sloppy mix continuously drops out the horizontal mixer into the Broadfield den. The den has a slowly moving floor moving with the speed of 300mm/min which prevents the adhering of superphosphate to the walls. Partially matured superphosphate is cut out of the den with the help of a rotating cutter wheel.

Granulation helps in producing the superphosphate of the required property. The granulation circuit consists of:-

Pulveriser breaks up the lumps.

It classifies the formed granules and the granules greater than 6 mm are again passed through the drum via pulveriser. Other nitrogen or potassium-containing compounds are dry blended with superphosphate to give complete fertilizers.

Comparison between SSP, DSP and TSP

As mentioned earlier phosphorus is an essential plant nutrient. SSP not only consists of phosphorus but also has traces of sulfur and calcium. Thus it can be used in soil having low soil phosphorus and sulfur. For phosphorus use only, it costs higher than other phosphorus fertilizers due to its low Phosphorus content(16%). Single Super Phosphate is mostly preferred for oilseed crops as sulfur is essential to increase the oil content of oilseeds.

Monocalcium phosphate and Gypsum are the two primary ingredients in Single Super Phosphate. They are used in the manufacture of different products. Monocalcium Phosphate is used to enrich animal feed whereas gypsum is used in the construction industry and the production of pharmaceutical products.

The per kg price of Single Super Phosphate is different in different countries. The price of fertilizer depends upon supply and demand.

Comparison  Between Superphosphate and DAP

It is also said that life without phosphorus is not possible. This is due to the following role that phosphorus has in plants:-

✓Phosphorus is the major constituent of ATP, known as energy currency without which the normal physiological process of the plant is impossible.

✓It is also an important constituent of DNA and RNA.

✓It also improves the quality of certain fruits, vegetables and grain crops.

✓It also enhances crop maturity and reduces the time required for seed and fruit ripening.

Thus, Single Super Phosphate is an essential fertilizer for our plants. If used in proper amount, It helps in overall growth of crops which leads to increase in production.

Grow Tomatoes At Home Everyone loves tomatoes. It is an indispensable part of our Kitchen. Tomato is one of the popular vegetables that is used around the globe for salads, sandwiches, sauces, ketchups and for many other recipes.   Everyday we need to go to the market and buy Tomatoes. We are unaware about some…

The climate on Earth is changing, this is undeniable. Presently, climate change is a major concern for the whole world, and Nepal is no exception. Everyyear, international conferences are held and billions of dollars are spent on tackling this global issue. Those of you who don’t know about the climate and how it is changing,…

Mushroom farming in Nepal is increasing at rapid pace and has helped many youths to start their own business. Nepal, Being an agricultural country its  majority of population(66%) is engaged in agriculture. Despite of  this much population involved in agriculture,the domestic production  does not meet the annual demand of the country and  import of food…

Irrigation is the process of supply of additional water to the crops through different irrigation channels. There are different methods of irrigation with their own advantages and disadvantages. Billions of people around the world are involved in Agriculture. For this, Irrigation is crucial. Without water we can’t produce food grains. However, Due to lack of…

Bsc Agriculture Entrance Syllabus Bsc Agriculture is becoming one of the top priority of Nepalese students after completion of +2 education. With growing interest, competition level is also getting high. Every Year thousands of students appear in entrance exams and only few hundreds secure the position in merit list. This is because some study hard…