Sloping Agricultural Land Technology (SALT) is a package of technology that uses fast growing perennial Nitrogen fixing trees or shrubs along the contour line with permanent, short term and medium term crops in between alleys. Generally nitrogen fixing trees are thickly planted in double rows to make hedgerows. Thus formed hedge rows serve as the living barrier and entraps the sediments and hence gradually transforms the sloping land to terrace land. This package of technology incorporates soil conservation and food production in just one setting. It is also known by the name of Contour hedgerow intercropping agroforestry technology (CHIAT).

The hedgerows of nitrogen fixing trees serve to improve the soil fertility both by nitrogen fixing and incorporation of hedgerow trimming. Also it plays a major role in reducing the soil loss through erosion and it is a proven technology in hill farming.

This technology originated from the Philippines as a result of problems faced by upland farmers of Davao del Sur, Mindanao Island. The major problem faced by these farmers was low and gradually declining farm income. Studies suggest that in just 10 years, the maize yield declined from 3.5 t/ha to 0.5 t/ha. Same scenario was observed among other crops. The yield of many crops has declined by 60 to 80 percent within a short period of time. Due to this low and declining farm income farmers have to search for the efficient alternatives. So, some farmers started to cultivate permanent crops. However, in these crops yield was also low. Later after from several studies it was known that the loss of soil and nutrients from the soil was the major reason behind declining yield of the crops. Also farmers were in search of better distribution of crops that would supply produce and income throughout the year as their traditional farming is able to supply yield and income in seasons only. They have to face the problem of hunger and money during the off season.

The Asian Rural Life Development Foundation (ARLDF) working for the holistic development of farming communities in hilly areas felt the problems faced by the farmers and worked several years to develop technology that could minimise the soil loss and increase productivity by improving the soil fertility. Later in 1971 they conceptualised the new farming technology which is named as Sloping Agricultural Land Technology (SALT).

SALT technology is of different types. Basically these types are the variations of original Sloping Agriculture Land Technology which are developed at the Mindanao Baptist Rural Life Centre (MBRLC). These types are:

This type mainly focuses on food production and has land use of 75 % for agriculture crops and remaining 25% for forest crops.

Basically, it is an agroforestry system based on livestock. Dairy goats are preferred by it. In this type 40% of the land is used for agriculture, 20% for forestry, and 40% for livestock. Forage crops and food crops are fertilised by livestock manure.

In this type, farmers grow food crops, fruit trees and forest trees. At first farmers develop SALT to fulfil food requirements for their family members and the livestocks they have reared. The other portion of land is used to cultivate the fruit trees like durian, rambutan etc. The trimmed foliage from hedgerows is used as the fertiliser source for fruit trees. Minimum of 2 hectare of land is required for this type.

This type is developed in half hectare of sloping land. Two-third part of the land is used for fruit trees and one-third for food crops.

Basic Procedure On Establishment Of SALT

SALT is a simple and easy method. This method can be established easily by laymen. The establishment of SALT method requires the adoption of following ten steps:

Step 1: Making an A frame 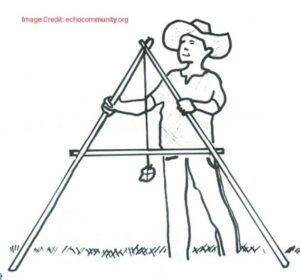 A frame is a simple effective tool that looks like letter A. This frame can be used by using the material available in your own farmland. The first and foremost step n Sloping Agriculture Land Technology  is to locate the contour lines of the field. A-Frame is an effective tool for locating the contour lines across the slope. It is made of a spirit level and three wooden or bamboo poles. Two poles must be one metre long, these two poles serve as the legs of A frame and the third one should be half metre long. These three are tied together in the shape of capital letter A. At first two one metre long poles are tied at their upper end and their lower ends are spread in the ground to about 1 metre to form a perfect angle. Then a short pole is tied that forms the crossbars. On the top of the crossbars, the carpenter’s level is tied. Using this A frame, we can locate the contour lines. Contour lines are the lines formed by joining the point at the same elevation. The A frame is the simplest and easiest tool to locate the contour lines.

Many other instruments can also be used to determine the contour lines. One of them is the variation in the A frame that uses string and rock as plumb bob. The other are O rings, water levels, homemade transits etc.

Before locating and marking the contour line all the unwanted material from the field should be removed. This facilitates locating the contour lines. At least two people are required to make the work faster and easier. One person will operate the A frame while another will mark the located contour lines. Marking of contour should begin from the highest point. At first let the A frame stand on the ground. Then, lift the front leg and without moving the rear end and place the front leg on the ground that is on the same level with the rear leg. The two legs of the A frame are assumed to be in the same level when the air space the carpenter’s level stops in the middle. Contour lines are located within the vertical drop of 1 metre but the hedge rows must not be more than 5 metre apart. If the slope is steeper , the closer are the hedgerows. The 1 metre vertical drop is identified by the ‘eye-hand’ method. 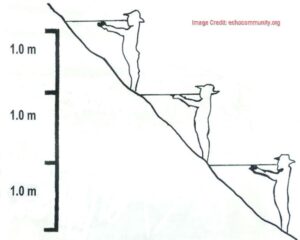 Step 3: Preparation of the contour line 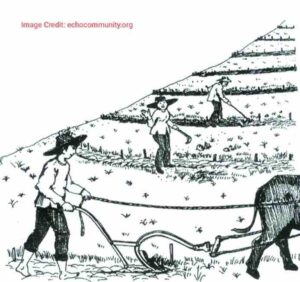 After locating and marking the contour lines, you have to prepare them by ploughing. Plough 0.5 metre below and above the marked contour line. Stakes serve as guide during ploughing.

Now you have to mark two furrows at a distance of half metre on each prepared contour line. Then seeds are sown in each furrow to develop the good, thick stand of seedlings. The best Nitrogen fixing trees and shrubs for Sloping Agricultural Land Technology are Flemingia macrophylla, Desmodium rensonii, Calliandra calothyrsus,and Gliricidia sepium. Other trees and shrubs suitable are Indigofera tyesmane, Calliandra tetragona, Leucaena diversifolia and Leucaena leucocephala. Their ability to grow in poor soil and in areas with long dry seasons has made them an excellent plant for watershed conservation and erosion control. The species best suited to your climate and soil are selected for growing. 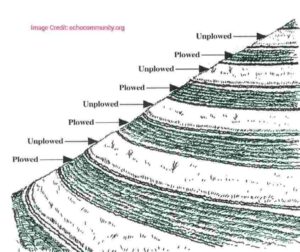 Strip refers to the land between the hedgerows i.e it is the space between the thick rows of nitrogen fixing trees where the crops are grown. Until hedgerows are fully grown, farming should be practised in alternate strips to prevent the erosion as the unploughed strips hold the soil. You can cultivate on the strips 2, 4, 6 , 8 and so on. Cultivation on every strip is possible when nitrogen fixing trees are fully grown.

Permanent crops are planted in every third strip. Permanent crops can be planted when the seeds of Nitrogen fixing trees are grown. For planting permanent trees, only the planting holes are dugged. Later ring weeding is practised for weed control. Banana, Citrus, Coffee, Durian, rambutan etc, are the crops that can be raised as the permanent crops. Always plant the tall plant on the bottom of the hill and short plant on the bottom of the hill. You can intercrop shade tolerant permanent trees with the tall trees. This is because the space of the strip decreases with slope while more spacing is required for tall crops.

The continuously growing Nitrogen fixing trees and shrubs are cut down to the height of 1 m to 1.5 m from the ground once a month. Then the printed leaves and twigs are piled at the base of the plant. This serves to reduce the raindrop impact as well as fertiliser source for both short, medium and permanent crops.

Practising crop rotation will help to maintain the fertility of soil. The grains (Corn, Upland rice, sorghum etc.), tubers ( Cassava, Camote) and other crops ( Pineapple, Castor bean) can be rotated with legumes and vice-versa. 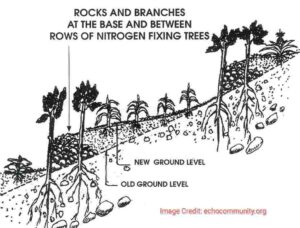 In order to control the erosion, pile up the straws, stalks, twigs, branches, rocks and stones at the base of nitrogen-fixing trees. Sustainable, naturally green, strong and beautiful terraces will be formed after a long time. This will help to anchor the soil.

SALT is the proven technology of upland farming. It has many advantages over the conventional farming practices. The following are the main benefits of Sloping Agricultural Land Technology:

Sloping Agricultural Land Technology is a proven technology for hill farming. SALT incorporates soil conservation measures and food production in just one setting. This technology is based on growing the fast growing perennial nitrogen fixing trees and the stripes between them were used to cultivate many short and medium duration food crops or forage crops. The original SALT technology originated from the Philippines in 1971. This was developed by Asian Rural Life Development Foundation. However, the original idea has been modified as per requirement and different types of Soping Agriculture Land Technology have been developed. There will not be one system for all the farmers. Based on the requirement of farmers, till now four types of of this technique have been developed. There are four types of land. This technology adopts ten steps for developing sustainable farming methods. These steps include making A frame, locating and marking the contour line, contour line preparation, planting nitrogen fixing trees and shrubs, cultivating alternate strips, planting permanent crops, planting short and medium term crops, trimming nitrogen fixing trees, practising crop rotation and building green terraces. This technology is ecologically sound, economically viable, culturally acceptable and easier to adopt and is gaining popularity in hill farming.

100+ Inspiring Slogans On Save Trees